OK… I can’t keep it in anymore… the weather around here is just too boring… so, here’s a post of importance to fill the gap: 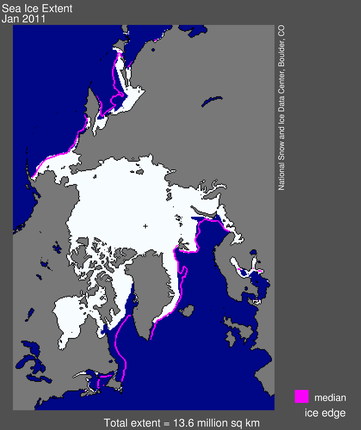 As in December 2010, the warm temperatures in January came from two sources: unfrozen areas of the ocean continued to release heat to the atmosphere, and the wind patterns accompanying the negative phase of the Arctic oscillation brought warm air into the Arctic. Near the end of January the negative Arctic oscillation pattern broke down and turned positive, which usually favors ice growth. It is unclear how long it will remain in a positive mode.

Warm conditions in the Arctic and cold conditions in northern Europe and the U.S. are linked to the strong negative mode of the Arctic oscillation. Cold air is denser than warmer air, so it sits closer to the surface. Around the North Pole, this dense cold air causes a circular wind pattern called the polar vortex , which helps keep cold air trapped near the poles. When sea ice has not formed during autumn and winter, heat from the ocean escapes and warms the atmosphere. This may weaken the polar vortex and allow air to spill out of the Arctic and into mid-latitude regions in some years, bringing potentially cold winter weather to lower latitudes.

Some scientists have speculated that more frequent episodes of a negative Arctic Oscillation, and the stormy winters that result, are linked to the loss of sea ice in the Arctic. Dr. James Overland of NOAA Pacific Marine Environmental Laboratory (PMEL) recently noted a link between low sea ice and a weak polar vortex in 2005, 2008, and the past two winters, all years with very low September sea ice extent.

More research on these ideas may shed light on the connections and have the potential to improve seasonal weather forecasting.