The pleasant warm days continue.  We got up to 29ºC officially yesterday.  The same day last year we hit a ridiculous 35ºC, and were days away from the start of the Dog Mountain fire.  Thankfully, the fire situation is nowhere near as desperate here or the rest of the province this year, however, we are still feeling the effects of last years drought here on Vancouver Island and that was exemplified by yesterdays announcement of “Extremely Dry” Drought conditions on Vancouver Island.

Here are the details:

The fire danger is only moderate but that is somewhat deceiving.

Things are starting to dry out around the province and the Island is no different.  Here is the BC Wildfire forecast for Beaver Creek.  Note it pops up to High on June 30 and drops back down again.

Only a Drizzle expected Friday/Canada Day

It dropping may be due to an expectation of rainfall on Friday, but the UWash Model only has the rain affecting the West Coast and mountainous areas with only a trace falling in the Valley itself.

If you’re wondering, the Canada Day Parade should be OK.  There might be some light drizzle or shower but it should be mostly just cool and cloudy in the morning.

Drought Lingers On for Vancouver Island and across Province.

Here is the latest drought map for BC and it isn’t good for our part of the world.

You can see on Vancouver Island the “very dry” area extends to the Alberni Valley and Port Alberni.

And if we look at the comparison between 2015 and 2016 we can see that the Island has fared the worst in terms of the drought but most of the province is having a hangover.  VI is the only location with Very Dry or Extremely Dry conditions in the entire province right now when last year the whole south coast and Haida Gwaii were affected.

The main effect this will have is to make the forests more susceptible to fire as well as disease or death due to stress and it is contributing to warmer stream temperatures which will especially impact returning salmon.

The BC Government has imposed fishing restrictions in freshwater on Vancouver Island. These are the only closures currently in BC.

The good news is it does not impact the Alberni Valley, yet.

More info on specific river and stream closures here. There are some exceptions to the closures on the east and south Island but I’ll be darned if I can find them on the website they are ‘supposed’ to be on.

Ah, here they are through the BC Gov press release with an image on Flickr?? 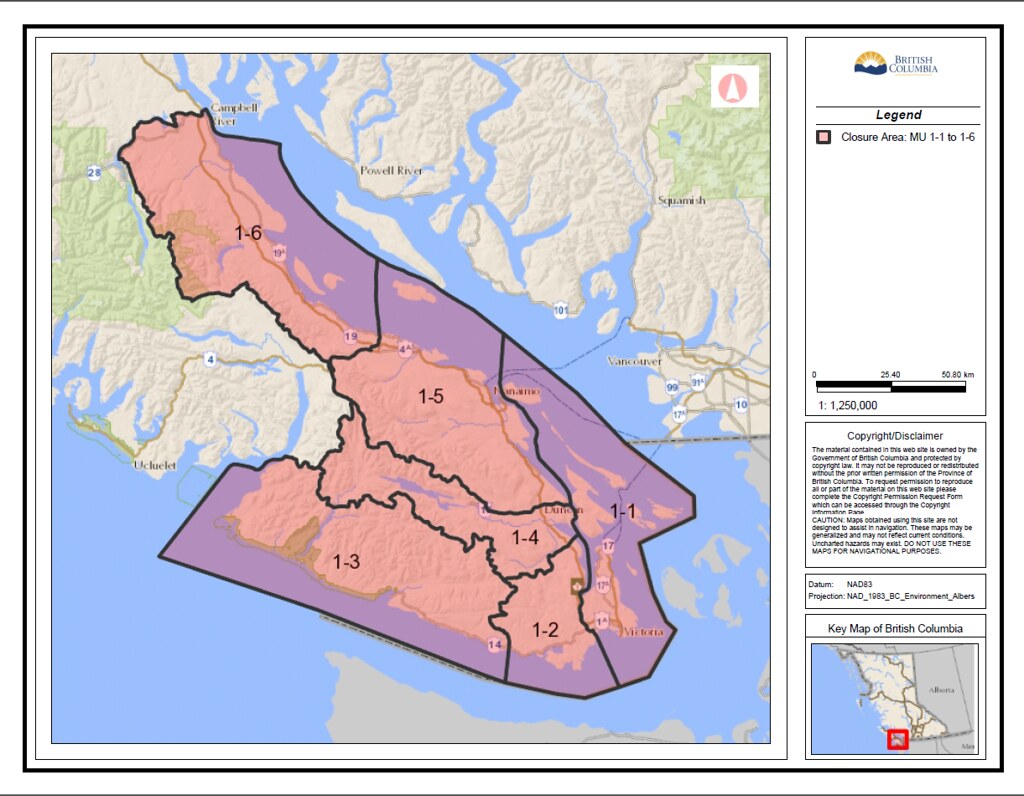 …the drought has lowered water levels and reduced flow in rivers and streams which is prompting the Province to close down the freshwater sports fishery across much of the southern island starting July 1, 2016.

The fishing closures will remain in place until drought conditions improve significantly.

You might be wondering if there are any water restrictions right now for Port Alberni or the Alberni Valley.  The answer is no not yet. The City of Port Alberni is watching water levels closely though and will make any announcements when necessary.  In the meantime, it never hurts to practice water conservation.

Another fire starts up in Dry Creek – Blankets City in Smoke

After all-time record – Relief has come – Fire Sparked along Beaufort.

Another fire starts up in Dry Creek – Blankets City in Smoke

After all-time record – Relief has come – Fire Sparked along Beaufort.

UPDATE – THE RECORD WILL BE BROKEN – Potential All Time Port Alberni record today. Extreme Fire Danger. Heat may not break as soon but will break.