You’ll likely see this popping up in local news outlets a lot in the next few days.

Last week, Accuweather.com released their winter forecast and singled out the lower mainland and Vancouver island for an especially cold and possibly snowy winter.

You can see the video that is causing all the fuss here.

You should note that he is quite confident in the low temperatures, but less so on the snow. This is because we generally get our cold from northerly artic outflows out of the Interior… This brings dry air. Where as for snow, we need some moisture, which mostly comes from the southwest off the Pacific.

What it sounds like to me is like a possible repeat of 2009/2010 when we had epic snowfall on the East Coast, particularly in Parksville due mostly to a ‘lake effect’ of sorts as the arctic air flowed out across the Strait and dumped snow on Oceanside but left us in the Valley and West Coast basically free and clear.

This is all due to a repeat moderate La Nina and the lowest to second lowest sea ice extent (depending on the methods used) in the Arctic creating another blocking weather pattern over northern Quebec as it has over the past couple year. This will likely bring more ‘Snowmageddon’ type events on the Eastern seaboard.
Bret Anderson also released an updated weekly forecast this morning and it’s looking like the cold than normal temperatures could start as soon as Halloween. 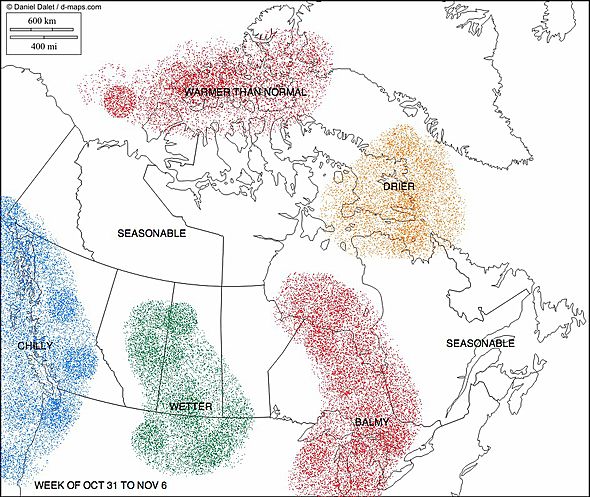 Oh, and a shout-out to my dad who’s down in Sayulita near Puerto Vallarta, Mexico. He’ll be in or very near the eye of Category 3 Hurricane Jova tonight. I’ll be watching up here, hoping he stays safe, and maybe has a video camera handy. 🙂

1 thought on “Winter chill in the news”