We beat another record on Tuesday. The Airport hit 30.6C which beat the record for the day set in 1999 but wasn’t quite good enough to land us the Top Hot Spot in Canada.

Tomorrow, Thursday, it is forecast to again be 30C so we will have a good chance of beating the 30.1C record set in 1999. That would give us a near clean sweep of all the records that were set in the hot stretch of September 1999.

It is forecast to cool a bit on Friday so we won’t be breaking records. But we will be close so keep an eye out.

Thanks to Bill Brown for giving me the heads up on the latest weekly update at Accuweather that shows that our best global model, the European Model expects the abnormally hot and dry weather to stretch all the way into October. 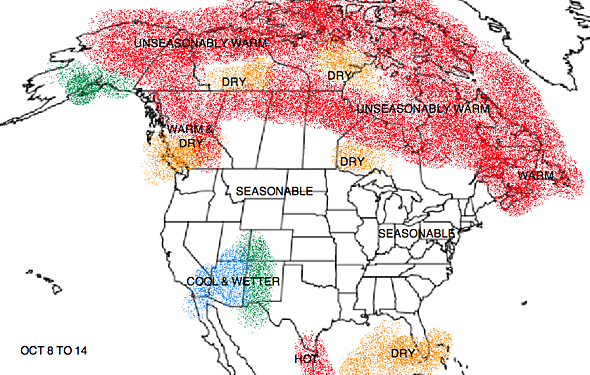 We are very very lucky that we do not have much in the way of thunderstorms and that the message seems to have gotten out for people to be careful with fire in the bush. We are getting to a point now where I think the BC Fire Service would really like to have the end come soon to this summer. But it doesn’t seem to be happening.

Is this pattern related to climate change? Maybe, Maybe not… the AVTimes actually did a poll on it yesterday. I said no. And then I wrote a letter with some imagery to back it up. I hope they print the images but if they don’t, here is the letter. The advantage with posting it here.. is I can include links. I gotta run, but I will add the links in a little bit.

The Ozone hole in 1987 when the Montreal Protocol was signed.
Click the image to go to NASA website on the anniversary.

Arctic Sea Ice as of September 17, 2012. Orange line is
average for this time of year.

On Sept 18 your web poll asked: “Do you think the recent warm trend is a sign of a significant climate change?”

At the time I saw it the predominant answer, and the one I clicked, was No.

Research shows that definitively pointing to human-caused global warming for weather events is still very difficult because it is a question of “climate” which is measured in years and decades.

However, recent statistical studies have shown it to be incredibly unlikely that recent extreme events could be caused by anything other than the decades of rising temperatures and CO2 levels. Despite this year’s cooling effect of La Nina and the Pacific Decadal Oscillation, recent reports from the NOAA show 2012 as the first and ninth warmest in the lower-48 States and World respectively since the 1800s. Unfortunately, all these numbers are hard to grasp and easy to forget.

Twenty five years ago, the snapshot of the Ozone hole over Antarctica spurred the world to sign the Montreal Protocol banning CFCs.

Satellite images of the shrinking Arctic ice cap are the equivalent for climate change and I hope your readers see them. The ice cap has lost 60% of its minimum area and over 75% of its volume since 1979. That’s like an area larger than BC and Ontario combined disappearing.

According to NASA, stopping the growth of the ozone hole “likely saved the world from an environmental crisis”. It is probably too late to halt the disappearance of summer Arctic sea ice but the hole left behind (and uncertain weather that that will create) will surely spur todays governments to stop the growth of CO2 emissions and reduce atmospheric concentrations before any more damage occurs and again save the world from environmental crisis.

November 2020 Summary – A Wet and Stormy Month, just like normal.

A little bit of everything this week. Please donate to Coldest Night and ACAWS.